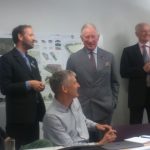 On 25th May during a visit to Dorset, Prince Charles officially opened the new Literary and Scientific Institute building in Bridport. Tim and other local people have spent several years raising funds for the historic building which has been refurbished to a high standard.

The Institute now includes a spacious café , office accommodation and meeting rooms for local businesses/ community organisations.  During his tour of the building Prince Charles met Tim and discussed local community-led initiatives including Dorset Community Energy and the Bridport Co-Housing project.
Prince Charles mentioned that he supports solar panels on schools and industrial buildings and Tim explained that Dorset Community Energy has supported educational activities including at Damers School in Poundbury.

We use cookies to ensure that we give you the best experience on our website. If you continue to use this site we will assume that you are happy with it.OK